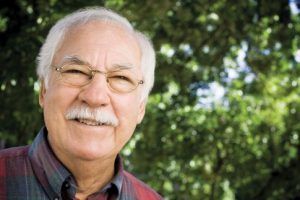 WILLIAM KLOEFKORN was born in 1932 in Attica, Kansas. After a rough, smalltown childhood and a stint in the Marines, he earned his BA and MA at Emporia State Teacher’s College. In 1962, he took a job in the English department at Nebraska Wesleyan University in Lincoln. Beginning with Alvin Turner As Farmer (1972), he was a tremendously productive writer, publishing over thirty books of poetry, four memoirs, and numerous stories and poems. In 1982, Kloefkorn was named State Poet of Nebraska. He was friends with many Nebraska poets including Ted Kooser, and hosted a segment on NET radio called “Poetry from the Plains.” His influence as a teacher and mentor has had a lasting effect: Nebraska State Poet Twyla Hansen and well-known poetry scholar Ted Genoways number among his former students.