The Language of Deep Time: Loren Eiseley’s “The Innocent Assassins” and the Science of the Prehistoric Plains 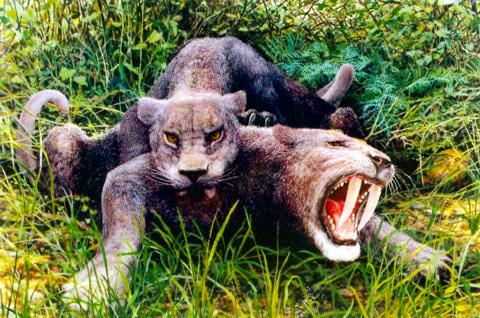 Nebraska’s own Loren Eiseley was an anthropologist, academic, and writer who was widely known for his nature writing and poetry. One of Eiseley’s most beloved poems, “The Innocent Assassins,” imagines the battle between two sabertooth cats, the fossils of whom Eiseley discovered in 1932 at Wildcat Ridge in Bayard, Nebraska. Remarkably, the fossils reveal an epic battle and agonizing death for both cats, as the fangs of one are forever impaled in the leg of the other.

A study of “The Innocent Assassins” reveals a wealth of information about the prehistoric plains, and the philosophizing of modern man. This unit will open the doors to the deep past by excavating Eiseley’s language to find the scientific truths waiting to be discovered within.

In this unit students will:

(This activity could take one class period, or several class periods, depending on teacher objectives for the unit.)

Sabertooth
Sabertooth, you beast
predator of the prairie
then, suddenly gone

Deep Time
What we know as plains
was once mountainous and sea.
What might we soon be?

Use “The Innocent Assassins” as a mentor text by having students imitate Eiseley’s form in a poem that imagines the plains region 40 million years from now. What type of being might stumble upon our fossilized remains? In what position or situation might that being find us? What will that being learn about our world from the artifacts we leave behind?